The Back to the Future meme does the rounds on Twitter and Facebook every couple of months or so. As Paul Clarke notes, people want to believe this rubbish, irrespective of whether it’s true or not, because it harks back to their younger days.

Similarly, the CCTV camera outside the house where George Orwell used to live pops up in my timeline at least once a month, despite there being no such camera.

This probably relates to people wanting to show they’re clever because (a) they’ve read a book, and (b) they understand the irony.

Both the Back to the Future and Orwell memes are, though, pretty harmless. But what if a meme isn’t as harmless?

This weekend saw a really good example. Tomas Sancio was being “burned” on Twitter for supposedly suggesting to a (female) journalist that they “read” an article they had in fact written.

Except, of course, that isn’t what he was saying. As he makes clear in later tweets, Sancio was saying he had “read” (“red”, past tense) the article and was offering a comment on it.

What’s worse, the actual exchange included an additional tweet from the journalist that didn’t show up in the screen grab doing the rounds. 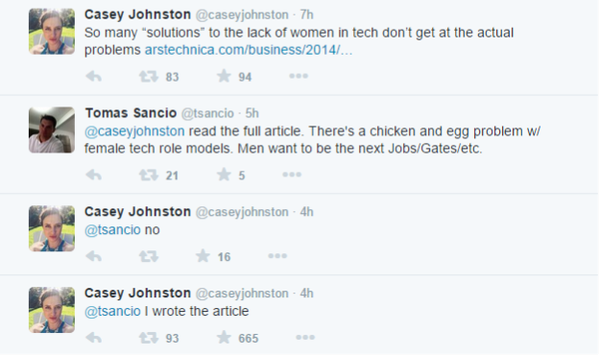 In this case, it would appear someone edited the screen grab of the actual conversation, which itself was based on a misunderstanding of what Sancio had tweeted.

What this meant for Sancio himself can be seen from the number of times the altered image was retweeted (of the order of a thousand) and the tenor of comments made directly to him. In my view he deals with it with good grace, but it can’t have been easy; at times what people tweeted at him was clearly harmful.

We see similarly harmful memes beyond the level of the individual: the infamous all-male panel at an international women’s conference and how many MPs vote on particular types of issues are two recent examples of memes supposedly representing system-wide issues when, in fact, they do no such thing.

But what do these harmful memes represent? Why do people create them, literally, out of something that isn’t there?

Clearly, they reinforce people’s existing views. People hold views about particular issues – “we live in a surveillance state” (Orwell’s meme); “men are misogynists” (Sancio’s tweet, the all-male panel); “all MPs are only in it for themselves” (the Commons pictures) – and the pictures/memes they see reinforce those views.

Having had their view so neatly backed-up it takes very little thought or effort to share those pictures/memes on to others, without wondering (or perhaps caring) whether or not they are accurate. Very quickly and very easily, then, the essence of what each meme represents – and so people’s views – is transmitted, irrespective of whether it’s true or not.

Much harm can be and is done quickly and easily by this process – just ask Tomas Sancio. Such behaviour isn’t anything that can curbed easily (it is, after all, human nature) but next time you see a meme that captures perfectly how someone might feel about a particular topic, try to engage your critical faculties and ask whether it is just a bit too perfect before sharing it.

One thought on “Back to the Future, misogynist coders and harmful memes”